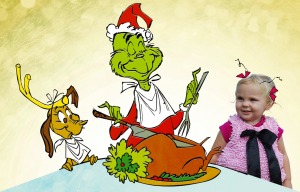 This one is for Megan Molloy who first said Eva was the spitting image of Cindy Lou Who!

My daughter is a girl. That might be obvious to many especially now with her frequent and occasionally public nude episodes but she didn’t learn to strip until half way through her second year.  I wonder if her nudity was brought on by potty training or her first year of people calling her a boy and frustrated by the fact that she could not speak or reach high enough out of her stroller to slap the idiots who would proffer, “Oh what a cute boy; he is very small for his age.” I can only imagine her annoyance at her derelict mother who instead of nipping this in the bud with a quick comment to avoid embarrassment, something like, “Her name is Eva, she’s a girl.” Instead I would say nothing about the gender miss-assignment because it happened too often and I was too tired, or maybe because somewhere I found it funny, waiting until the stranger noticed Eva’s hot pink onezie. What did it matter anyway? Eva would not be genderless for long.

At some point in November last year I realized her hair was long enough for pigtails. I bought hair elastics and twisted two mini pigtails into place and showed Eva her reflection in the mirror. From that day on, Eva has been a girl.  The attention she got for her pigtails did not go unnoticed, and now almost every morning Eva asks for pigtails, and mommy has lost another five minutes out of her morning routine. Eva picks out the elastics- they usually have to be blue. Then she spills the other hundred and has to pick them up one by one and put them back in the box. Mommy then brushes Eva’s hair on one side and as quickly and as painlessly as possible twists the pigtail into shape and whips an elastic around it to hold it in place to which Eva responds predictably.

“Hurt, Hurt, Hurt” and then she turns around to me, hands me the other blue elastic and moves around for me to do the opposite side. I repeat. She repeats.

I finish, and pick her up and show her what she looks like in her mirror. A smile beams across her face, and my heart melts, as well as the hearts of all the little boys at playgroup. Clothes tend to be more of a negotiation than her pigtails, so when she can be convinced to wear clothes and we head out to a public place we are perfectly prepared for our stranger encounters.  Now they say, “Wow what a cute little girl.” Not only did my daughter seemingly overnight turn from a boy into a girl, she is also now not a baby but a little girl. The unknown power of the pigtail.

But then we happen upon someone who says something I am not expecting.

“ Cindy Lou Who from Whoville?”

“ From the book, How the Grinch Stole Christmas.”

“Oh, Dr. Seuss.”  I say not really remembering the book.

We motor in the stroller down the street toward the Post Office, and someone else stops us, and it happens again.

“Who?” I ask for comic effect.

“Cindy Lou Who, who couldn’t be more than two”

“How true!” I say looking at my almost two year old.

When I get home I look up Cindy Lou Who on the internet. The resemblance is uncanny, not only does Eva look like Cindy Lou Who, but the Grinch’s dog looks a lot like our miniature dachshund Piglet.  So who is the Grinch?

With the aid of Photoshop Daddy made a poster for Eva for her birthday.  Eva appears as Cindy Lou Who with the Grinch, and the Grinch’s dog, Max. Underneath it he wrote, Happy Christmas from the Grinch to the Pinch, which is Eva’s nickname- “Pinchy.” Meanwhile I rushed out on Christmas Eve to buy Eva a copy of the Dr. Seuss book for Christmas.  But it wasn’t until after the holidays and Eva’s birthday were over, after we put the poster up in her bedroom that I, her derelict mother, sat down to read her the “How the Grinch Stole Christmas” book. I am always a bit slow, figuring things out a bit after the threshold, typically derelict, but Eva cannot yet tell time.

I read to her, “ The Grinch hated Christmas! The whole Christmas season! Now please don’t ask why. No one quite knows the reason. It could be his head wasn’t screwed on just right. It could be perhaps that his shoes were too tight. But I think that the most likely reason of all may have been that his heart was two sizes too small. “

“Christmas tree, Christmas tree.” She said with the disturbing recently acquired tone of sadness I had heard only once before when a pigeon flew down and stole her bread. Now her parents were stealing her Christmas tree.

“Why are you taking the Christmas tree?”

It’s my stock answer. Everything is broken in our house: the cartoon channel, the DVD player, mommy’s iphone and the internet are all broken in addition of course to the myriad of things that actually are broken.

“No, mended!” She likes to insist but I shake my head and reiterate,

“No Broken. We need to fix the Christmas tree lights. Daddy will bring it back next year.”

The blessing or curse with toddlers is of course that they have no attention span, so I was hoping that she would soon forget about her Christmas tree.

“Daddy fix it.” she said at about the same time as I spotted Daddy’s bright red axe propped up outside ready to be put to work. I tried to motion to Daddy to hide it but he just looked at me strangely as I jerked my head to the right toward the axe with the express parent sign language that he should hide it.

We waited until her naptime before Daddy chopped up the tree and then stored its limbs in the basement for firewood and its small branches went into the fireplace for kindling. I am sure Daddy felt like an executioner, but Mommy felt guilty for lying to Eva who in her imagination will be waiting for the Christmas tree to come back from Daddy’s workshop for an entire year.

When she woke up from her nap, she was pointing to the Grinch poster laughing at Max, the dog saying, “Piggy, Piggy.”

Daddy pointed to her picture as Cindy Lou Who and asked,

Daddy and Eva laughed. I grimaced, unintentionally in character.

I pretended to cry, again in character.

The next day I had a morning meeting at a coffee shop where new mothers hang out with their babies. Across from us a mother picked up a crying baby and put it over her shoulder where it stared at me with its beady baby eyes.

I shuddered my hands went into spasm, my arms making wild movements, as I declared to my friend,

After I left the café I was walking down the street feeling guilty for my terrible unconscious reaction to seeing a little crying baby in the café, when I saw a mother with her one year old who was doing her baby best to walk down the sidewalk. In an attempt at kindness, I smiled and offered my best,

The baby looked up at me, and promptly fell over and skinned her knee.

“I am the Grinch. “ came my terrible self-revelation.

The next morning Eva and I were in a rush to get ready and I didn’t have a chance to do her pigtails. When she came home from playgroup she demanded her pigtails be quaffed. But these weren’t any pigtails, these were.

So I obliged, and she spent the next thirty minutes admiring herself before her Daddy arrived home from work. When he walked in her eyes lit up, her smile went from ear to ear and her pigtails bobbed up and down in new heights of Cindy Lou Who cuteness. She repeated,

Daddy handed Eva back to me for her dinner and she looked at me with great disgust.

“No eat your carrots,” I responded.

Giving up on dinner I announce, “Time for a bath.”

“No” she screams, I give up and she plays with Daddy for the rest of the evening, while I clean up her lunch box, make her bottle and prepare our dinner and meals for the following day.

“No” she says “Yes” I say, taking her from her father’s arms and from her playpen.

She cries but accepts her fate. In her room she asks for the, “Grinch book. “ so I pick it up for us to read while I take out her pigtails.

So I asked Eva,

“Do you love the Grinch?”

Eva replied, “Yes and I love Mommy too.” My heart grew three sizes that night and so instead of telling her Christmas was over I told her that a new year had begun. The next day, instead of cleaning out her drawers like I had intended to we went to the Aquarium, and spent the rest of the time chatting about seals, and turtles and flamingos and forgot about “The Grinch.” After she went down for her nap, I snuck the Grinch book out of her room and packed it away with the Christmas lights, extra wrapping paper, and her Christmas stocking. The picture of Cindy Lou Who is still up in her room a gentle reminder for the Grinch to appreciate every day of Little Cindy Lou Who, who cannot be more than two and not to spend every other moment washing miniature Tupperware containers, to let the dirty dishes stack up once and awhile.  There is more to life and it sleeps in a little room next to mine. 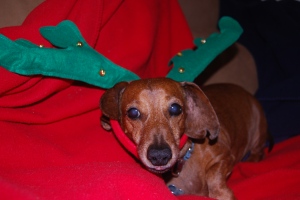