It was my new years resolution to post at least once a week, and although I have so many posts floating around in my head I am right up on that deadline, as I am posting at essentially five minutes to five on Friday the last day of the second week of my blog’s life. How could I almost give up on my resolution in the first week of January? Real Life and a two year old is the sad and true answer. A sick two year old and the problem with a sick two year old is it usually results in a sick thirty seven year old, but no excuses- its not good enough!

I am starting to feel my age now and yesterday I said to Eva:

“Two” she says, and then I ask

“Do you know how old mommy is?”

And she looks at me blankly, confused as she can only count to “eleven-teen.”

“Hmmm” I thought to be one again! Or even two instead of thirty-seven which is such a mouthful it sounds depressing even in its iteration. Tempus Fugit.

Then I looked down at Eva and saw her twinkling fairy like blue eyes looking back at me without a care in her world, all seven hundred and thirty days of her little life. I remembered that piece of advice that parents of older kids always tell the bedraggled mother of a newborn, and boy was I bedraggled so I got this all the time,

“Savor these days as they are quick. She will grow up too fast.” I would usually smile back with my fakest smile thinking, fine but you haven’t been up all night with a screaming newborn and mastitis thinking will these days ever end.

The other day I was hunting through a second hand barn, the only shopping I do now days, and between buying Eva a 1970s Minnie Mouse in a racer car, I happened upon a hard backed edition of Peter Pan. I had forgotten that it was my favorite book as an adult if not one of my favorites as a child, so I bought it and opened it up. As Eva was driving her Minnie Mouse car up my leg, I flipped open the page and was aghast after reading the first paragraph. I include it below.

“All children, except one, grow up. They soon know that they will grow up, and the way Wendy knew was this. One day when she was two years old she was playing in a garden, and she plucked another flower and ran with it to her mother. I suppose she must have looked rather delightful, for Mrs. Darling put her hand to her heart and cried, “Oh, why can’t you remain like this for ever!” This was all that passed between them on the subject, but henceforth Wendy knew that she must grow up. You always know after you are two. Two is the beginning of the end.” J.M. Barrie, Peter Pan.

Or “The End of the Beginning” like Winston Churchill’s famous speech, I thought. We have just potty trained Eva, she was wearing big girl undies, dressing herself and for the first time in two years I felt that for a minute I could leave her alone in the living room while I dashed to the kitchen for a chocolate square. Phew, we had conquered her last major baby milestone what was next? I was so terribly stretched with my job and one child, yes just one child that I haven’t been able to look back at our lives, perhaps that is what this blog is for, a record for Eva and I and anyone who cares to read it. It is a confessional for my derelict ways, a diary of our highs and lows, our conversations and arguments.

Eva’s second birthday was on December 21st, the winter solstice, the turning of the seasons. That night she went to sleep singing, “Happy Birthday to Eva, Happy Birthday to me.” The next morning when I went into get her as I usually do as I have done every morning of her life, I bent down and lifted her out of her crib giving her a huge kiss on forehead and for the first time in her life she wiped it away with a look of disgust. My heart sunk, it felt like she had wiped away every kiss I had ever given her.  To add insult to injury when Daddy kissed her she wouldn’t wipe it away. I was crushed. Two was the beginning of the end. But that night when I put her to bed at the close of her first day as a two year old, she said without prompting. “Night Night Fairy, I believe in Fairies.” as I had said to her every night of her two years as we turned off her Tinker bell lamp.  At least she still believes in Fairies and maybe one day before she is three she will let her mother give her a kiss again without wiping it away.

Later that week when we were walking past my parent’s house she ran to a little plant with red flowers that she used to pick for me, she picked three bunches of flowers, then looked up at me and down at the flowers and said “Flowers for Daddy.” My heart predictably sank again… and I thought Daddy doesn’t know it yet but it is the beginning of the end even for him, so instead of letting the little flowers wilt on the counter or behind an ear as we had done in the past, I put them in a little shot glass, where they still are for a few more days anyway. This is what we now use shot glasses for BTW- repurposing.

Tempus Fugit. Two is the Beginning of the End. 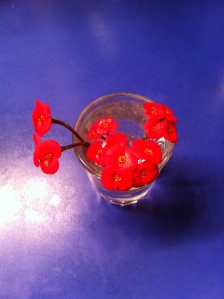